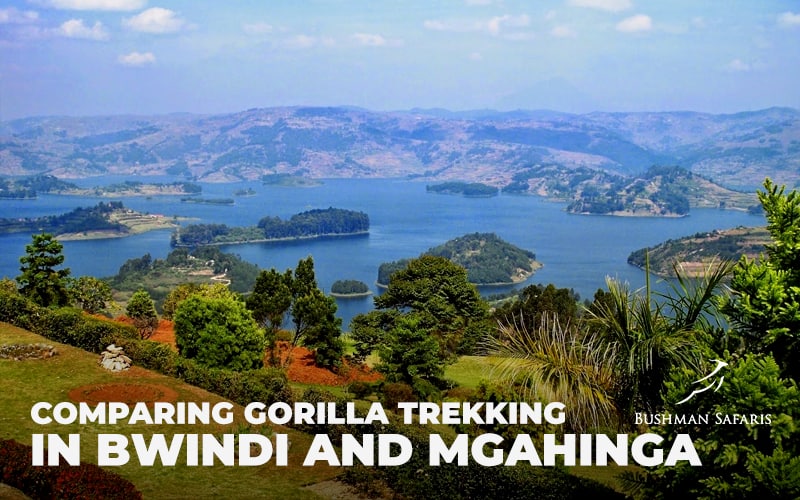 UNESCO has labelled Bwindi Impenetrable Forest National Park as a world heritage site since 1994, majorly due to its tremendous biodiversity. Besides the mountain gorillas, Bwindi currently has around 120 species of mammals, including the African Civet, side-striped Jackal, African Golden Cat, Giant Forest Pigs, and small Antelopes. Many primates may be found in the park, including Black/White Colobus Monkeys, L’Hoest’s Monkeys, and Chimpanzees. More than 310 species of birds and over 220 species of butterflies may be spotted in this gigantic forest. Some of the notable species include the White-tailed blue flycatcher, and Brown-necked parrots, African Green Broadbill, and the Frazers Eagle Owl.

You can also do gorilla trekking in Mgahinga National Park. Being the smallest national park in Uganda, it sits just under three dormant volcanoes. In contrast to Bwindi, Mgahinga is part of the greater Virunga region and conservation area that includes the Volcanoes National Park in Rwanda and Virunga National Park in Congo. The golden monkeys and the rare mountain gorillas are the top attractions. Visitors can also do other activities as well, like bird-watching, mountain climbing, going for nature/forest walks, and spotting mammals and smaller primates.

It is important to note that Bwindi impenetrable forest is home to roughly 45% of the remaining population of mountain gorillas, distinctly setting it apart from every other gorilla park. It is way bigger than Mgahinga, covering an area of 321 km2. Bwindi comprise more than 35 known groups of a gorilla, 15 of which are habituated and open for gorilla trekking in Uganda. On the other hand, Mgahinga is just a single habituated gorilla group open for tourism. Additionally, gorilla trekking in Bwindi may be carried out in four different sectors of the park, with each of them hosting more than a single gorilla group. Two groups in the Rushaga and Nkuringo sectors are open for experiencing gorilla habituation where no more than four visitors are allowed to spend 4 hours with the gorilla family. This unique experience may only be attained in Bwindi Impenetrable Forest National Park and is quite different from standard gorilla trekking when eight visitors are permitted to see a gorilla family for just a single hour. While there may be a plethora of other differences, too, the choice is ultimately yours!

PrevPreviousWhy Uganda Safaris Are A Foremost Preference When Africa Is Full Of Wilds?
NextEight Reasons Uganda Should Be On Your Safari Bucket ListNext