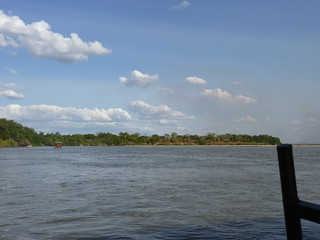 Tanzania is a beautiful holiday destination in East Africa with vast landscapes, fascinating wilderness and mindblowing views. The country also encompasses several types of serene water bodies like rivers and lakes, where you can enjoy exciting boat rides. On your boat tour, you will encounter various animal and bird species, like elephants, hippos and flamingos, along with beautiful natural views. Here are two adventurous riverboat safaris you must go on with your family and friends in Tanzania.

The Rufiji River is the longest and largest river in Tanzania, which flows from the southwest highlands into the Indian Ocean. It divides the Nyere National Park, formerly Selous Game Reserve, into the northern and southern sections. The park offers two types of boat safaris – an afternoon boat trip which takes about two to three hours, and a full-day boat trip. While on your boat safari, you will come across wildlife like hippos, African crocodiles, elephants, African lions, zebras and wildebeests. You will also witness various birds like African fish eagles, flamingos, yellow-billed storks and African spoonbills.

Saadani National Park is the only coastal national park in Tanzania, as the Wami River forms the park’s southern border. Visitors can experience the boat safari, which takes about two to three hours, in the morning or afternoon. You will see animals like African bush elephants, Cape buffaloes, hippos, crocodiles, and waterbucks, among many others. Birdwatchers will view riverine birds such as African cuckoo hawks, greater flamingos, African fish eagles, giant kingfishers, purple herons and other species.

How to get there: You can drive from Dar es Salaam (331 km) or Arusha (561 km), which takes about five to seven hours. You can also take a boat ride to the national park from Dar es Salaam, Tanga, Pangani, Bagamoyo and Zanzibar. A third alternative would be to fly to the park landing on the Saadani airstrip from Arusha, Mwanza, Zanzibar, Manyara or Dar es Salaam.

Best Time to Go for a Tanzanian Boat Safari

Boat safaris are available throughout the year, though the ideal time to experience the fun activity would be from June to October, which is the dry season.

Create wonderful memories by experiencing the amazing boat safari in Tanzania with Bushman Safari. Book trips to Uganda and Tanzania, and go on fun game drives, gorilla trekking and guided tours. Plan vacations at competitive pricing with worldwide coverage. To know more about our services, call us today.