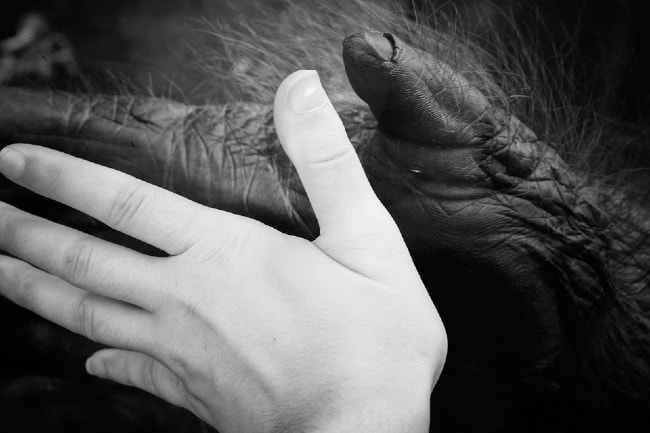 According to the latest findings, chimpanzees think and behave in a manner very similar to homo-sapiens. Therefore, these primates can be primarily referred to as human’s cousins. Use this guide to clear all your misconceptions and learn more about the similarities between humans’ twins.

Human children are not the only ones who spend hours playing and having fun but so do the chimp children. According to Ethologists- the Behavioral Scientists, chimps spend hours playing or doing activities that do not produce clear, immediate results. Chimp’s game types and playmates also change as they age. Chimp’s preferences mature in the same way humans mature with age. Both these species become competitive with age.

2) Chimps Smile The Way Humans Do!

Just like humans, chimps smile in silence, burst out laughing and laugh out loud. It is a way of communicating their positive emotions that were considered a uniquely human feature until now. Both chimps and humans can express their emotions through facial expressions. Although it was considered a trait only humans could show, according to many experiments, chimpanzees are human’s best friends and there you will find them mirroring your expressions.

3) Chimpanzees Would Cook If Given The Chance!

Unlike humans, chimpanzees do not have access to restaurants, but they will travel any distance to find their food ingredients to prepare a flavoursome feast. According to scientists from Harvard University (USA), chimps also prefer cooked food to raw food, much like humans do. Between a cooked potato and a raw one, the primates opt for a cooked one without any hesitation. They just do not have the ability to start a fire, yet if they are given a pan to cook, experiments suggest, they immediately learn how to put it into use.

4) ‘Think About Thinking’ Not Just Limited To Humans!

One of the salient similarities between a chimp and a human is their metacognition- the ability to reflect on their own thoughts and mental processes. Thus, both the species are conscious of the knowledge they possess and do not possess, allowing them to make smart decisions.

It’s not just humans that have a sense of right and wrong, but even chimps can discriminate between appropriate and inappropriate behaviours, especially the young, baby chimpanzees. From the journal Human Nature, it was evident that when a chimp watched scenes of a baby being harmed and killed by another member of their own species, it reacted with anger. This experiment was a clear example that even these primates have a sense of morality just like humans do.

It is a misconception that humans can outperform chimps when it comes to cognitive functions. On the contrary, according to the University of Kyoto (Japan), a 5-year-old chimpanzee’s ability to remember the displayed numbers on a screen is much higher than that of an adult human. Furthermore, the photographic memory, which is the ability to recall what is heard or seen, declines with age in both species.

The famous quote, ‘whoever finds a friend finds a treasure’ not only applies to humans but also chimps. Through thorough research of the primates’ behaviour, it was discovered that they only live around their good friends and also help them when it comes to sharing food, confrontation and collaboration. The ageing chimps prefer spending time with their friends with whom they had developed a friendship over the years. From comforting each other to relieving their group member’s stress, they have emotions just like humans. And sometimes they are more kind than humans.

The common DNA that humans share with chimps accounts for several of the similarities. Whether it is playing, or bonding, both species are much alike than one can imagine! So, next time when you are having a good time with your friends, remember chimps may be doing the same! So, contact us and have the best time with Bushman Safari to not miss the chance to encounter this beautiful species with us!