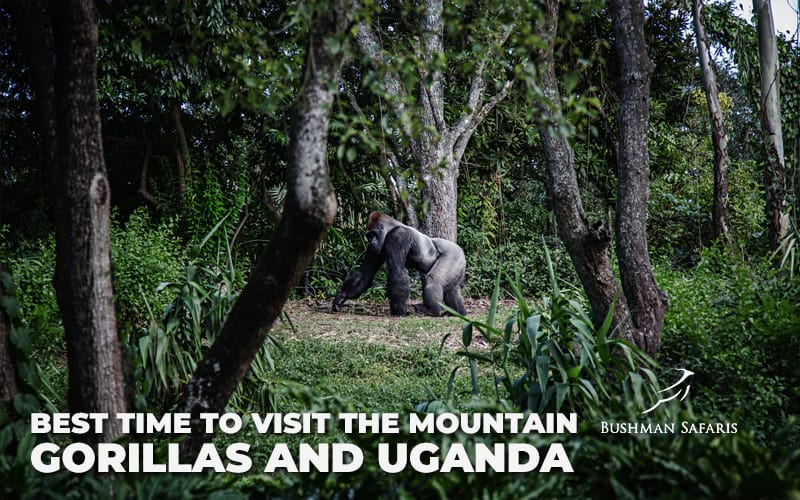 Planning to catch up with giant primates and soak in some rainforest weather? Confused about when is the right time for Uganda gorilla tours? We have all the answers.

Uganda is a bucket list destination for travellers all around the world. And meeting mountain gorilla’s counts among the first things to do when you visit Uganda. This place on earth is famously known as a whole round travel destination to any tourist planning to visit. It is primarily due to the climate and location of the equator. Other factors making Uganda a travel destination throughout the year are wildlife, especially mountain gorillas, rain forests, and Lake Victoria, with its unique weather patterns to the climate.

Uganda essentially has two rainy seasons; the short season, which starts from October to November, and the long rainy season that begins in Mid-march and extends to the end of May. Therefore, June, July, August, and September marks the best time of the year to pay mountain gorillas a visit in Uganda. Apart from these, January and February are relatively feasible months too.

With the best months to travel to Uganda, most tourists choose to plan their trips from May to September to February since, during these months, the rain isn’t very generous, and it’s sunny in most of the Uganda attractions. However, December is one of the busiest months of the year in most national parks. Thus, it is recommended to book the accommodation and get a gorilla permit in time to avoid disappointments. The Christmas season is the peak time, as most of Uganda plan to take vacations to national parks during this time.

Visiting in the low season is best for many travelers since the accommodation is cheap. Visiting this season also means that the jungle will be less crowded. Moreover, February and September are considerable months for a safari vacation in Uganda because the hotels are not completely booked as such in the high season. March to May and October to November mark the low season when most of the hotels offer cheap rates to attract more tourists to make bookings with them. Also, gorilla permit prices in the low season are also reduced.

Uganda has a high topography, which means the climate is cool, however, if you are planning to come for a gorilla trek, the two dry seasons of January and February and from June to September are the best. The dry season provides the easiest trekking conditions. You can come to meet the glorious gorillas and learn more facts about mountain gorillas in chill, dry weather.

Also, the dry season is perfect for game viewing in all the national parks; from February and March, September, and the beginning of October.  Bird watching activity is best carried out between November and April when most migrant birds are present in the country. However, it is advisable to avoid taking vacations during the heavy rain months of April and May if they are not looking forward to spoiling the fun.

Interested in Uganda Gorilla tours & Wildlife safaris? Choose a gorilla tour package that matches your interests or click below to customize a tour, tailored for you!