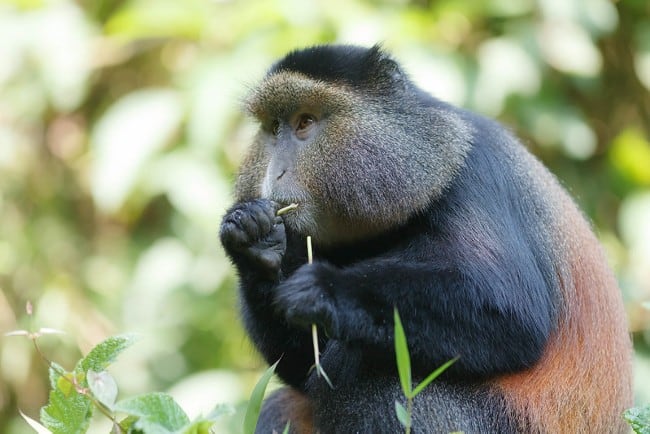 The rich biodiversity of Africa is truly a magnet that pulls tourists from all over the world to take in its beauty and wildlife. The more you explore, the more you will realize the vastness of splendid attractions that this beautiful land offers. Not only that but you will also find endangered animal and bird species seeking abode on this continent. And a golden opportunity awaits you in the wilds of Africa in the form of the golden monkey trek. A golden monkey trek accounts for one of the best highlights of African tourism as you witness social groups of 30 primates living in the regions of Uganda, Rwanda and the Democratic Republic of Congo.

Where Can you Find Golden Monkeys?

These golden monkeys adorned with golden-orange patches on the flanks and back have created a habitat in the highland areas, especially in bamboo forests. They can be found in the Virunga volcanic mountains of Central Africa, including four national parks – Mgahinga in south-west Uganda, Volcanoes in north-west Rwanda, and Virunga and Kahuzi-Biéga in the eastern Democratic Republic of Congo.

Do you Need a Permit for A Golden Monkey Trek?

Prior to making any bookings to set out for a golden monkey trek, make sure you are producing a permit. There would be armed rangers for protection against any threat in the jungle and an expert local tracker to get you acquainted with the habitat and track down the primates. The permit would also include the time you spend with the primates.

For setting your trails in the dense forests and highlands, you can choose a dry tenure to pay a visit to the monkeys as there would be no wet terrain for any unfortunate accidents to happen. This would make the duration of June to September and December to February an ideal time to visit. However, you can also plan for the rainy weather, when you can easily spot the monkeys due to an abundance of food in the park.

What Do you Need to Pack?

– A high pixel camera would fare well on your trek as you track down the primates and capture some amazing experiences and sceneries.

– Make sure to pack light and essential things in your fanny pack for easy access to materials, such as mosquito repellents and band-aids, among others.

– Wear lighter clothes to set out for a trek so that they don’t weigh you down. Moreover, make sure that your footwear is appropriate for a hike in the forest.

– If you decide to set for a rainy trek, ensure that you travel with a raincoat during the hike.

What Happens During the Trek?

You will set out in a group of eight members maximum and be escorted by an armed ranger and a local guide expert to navigate and track down the monkeys. Before you proceed with the trek, you will be given a quintessential list of do’s and don’ts on the trek along with a safety briefing. And with that, you will begin your trek.

Now that you have gained essential knowledge about a golden monkey trek, you will need a proper guide who would drive you through the process of choosing great packages of Uganda and other places in Africa with rich wildlife. Reach out to Bushman Safari, where you will get to choose from the numerous customized packages that we offer while we prioritize your comfort and a great adventure above all.

PrevPrevious5 Activities for Thrill Seekers in Jinja, Uganda
Next5 Mysterious Sites In Tanzania You Must VisitNext