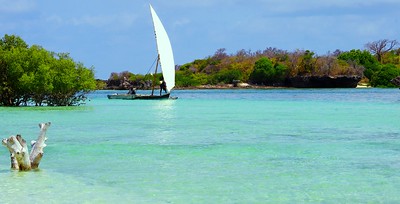 Tanzania is a beautiful country in East Africa. Africa’s highest peak Mt. Kilimanjaro is found here. The country is also famous for its wildebeest migration and hot air balloon safari. But the four unexplored places below will leave your mind blown. Even though these places are not well known, you and our family will have the best time of your life here.

The park, which was previously known as Selous Game Reserve, is as big as Switzerland, covering an area of 30,893 sq km but surprisingly has very few visitors. It is the country’s largest national park and one of the world’s largest wildlife sanctuaries. Tourists will enjoy the amusing animal safari as the park is home to one-tenth of the African elephant population, hippos, buffaloes, wild dogs and lions. The national park comprises Tanzania’s largest river – the Rufiji River, which houses hippos and crocodiles. There are several species of birds found in the park. You can also go on guided nature walks and adventurous riverboat safaris.

– June to September for the game drive

This off-beat national park should be experienced on foot as there are no roads, and it can be accessed only by boats. It is home to several species of animals, birds and plants. But its famous attraction is chimpanzee trekking as the park is one of the only protected two areas in Tanzania. The park includes Lake Tanganyika, where you can go fishing.

– July to October for chimpanzee trekking

The national park is situated on Africa’s biggest lake – Lake Victoria. The island’s forests and woodland are a haven for chimpanzees, monkeys, giraffes, rhinos and elephants. At the same time, the shoreline is home to hippos and crocodiles. The Rubondo island also comprises over 200 bird species and about 70 butterfly species. You can even camp on the island.

– November to March for bird watching

Mafia Island is situated in the Indian Ocean. You can visit the Mafia Island Marine Park located nearby, which is a protected marine nature reserve. Whale sharks migrate along the coast of the island during the months of October to April. You can observe these charming creatures near the waters of Mafia Island and also partake in several other water sports.

– October to April especially to witness the whale sharks

Book your holiday to Africa. Explore the amazing food and culture. With Bushman Safari, grab tour packages at competitive prices and customize your vacation as per your requirements and conscience. Contact us today.

PrevPreviousHikers! Here’s a Guide to Prep for Kilimanjaro
Next6 Attractions You Cannot Miss at Katavi National ParkNext