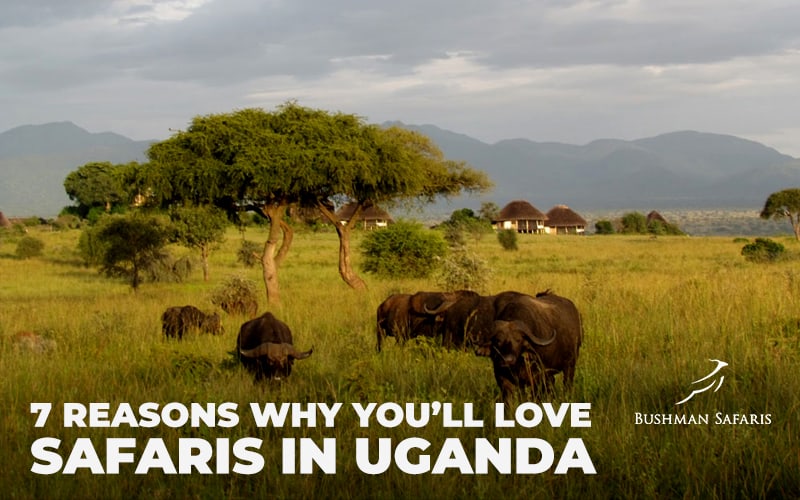 Being inhabited by green savannah plains and primates, Uganda is the only country in the lush forests of Africa. With a plethora of waterfalls, tea plantations, mountains, and beautiful lakes, there are countless reasons why your Uganda tours will be nothing short of epic. Let’s explore the top 7 reasons why you’ll love safaris in Uganda.

As a travel explorer, you know that your safari experience may be substantially influenced by the locals’ attitude. However, this isn’t the case when it comes to Uganda. In fact, Ugandan people are quite open, curious, friendly, welcoming, and have a great sense of humour.

The cuisine of Uganda is as rich as its culture. On your visit, witness more than 50 tribes within Uganda, each of them having their staple food. Then there is the street food, with Rolex being the most notable. While Rolex may be hugely famous as a timepiece brand in many countries, it’s a popular street food that one can eat at any time of the day.

It is the second deepest lake within the African continent, lying in the southwestern part of Uganda, especially close to the popular tourist destination, the Rwandan border. Being roughly 1,963 meters above sea level, this lake is usually cool in both the evening and morning hours all year round.

It is the longest river in the world, with its source originating in Uganda. River Nile flows from the surrounding areas near to the equator line to the safari desert and then straight to the eastern Mediterranean Sea. It passes through nine countries and is roughly 6600 kilometres long. Some of these countries include Ethiopia, Tanzania, Kenya, Burundi, Rwanda, and Sudan.

Put Uganda at the top of your bucket list if you’re a bird lover. Including some of the rarest birds, for example, Shelly’s Crimsonwing, the great blue turaco, and the shoebill, Uganda houses more than 1,000 bird species. At Uganda, enjoy a birding experience that is found nowhere else.

Uganda is one of the unique countries of Africa, housing an exceptional wildlife concentration. The Big Five Safari Animals is the major wildlife attraction of Africa, including Buffaloes, Elephant, Rhino, Leopard, and the Lion.

Uganda comprises more than half of the remaining endangered mountain gorillas in the world. These distinct enchanting apes are residents in the Virunga Massif that is shared by the Democratic Republic of Congo, Rwanda, and Uganda. This is the reason why hundreds of visitors flock the country annually to witness mountain gorillas.