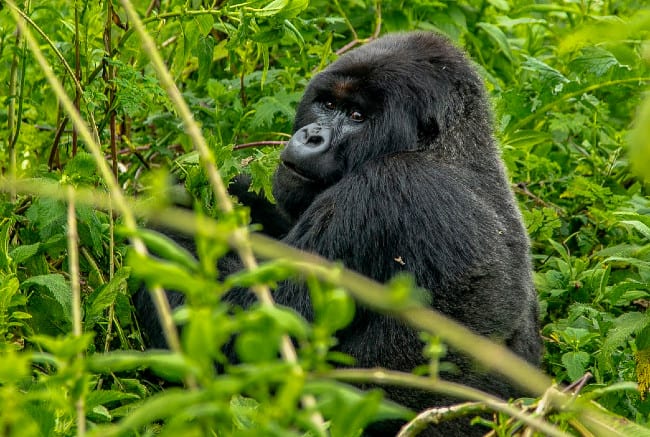 The largest living primates on earth are the gorillas. These animals are the closest to humans in terms of their genetic makeup. Studies show that humans share 97% of their genetic code with gorillas. People often are astonished at how similar gorillas can behave towards humans. They are non-territorial and live in groups that are called troops. These creatures are loving and have maternal instincts towards infant gorillas. Although there are several facts of these affectionate creatures that are not known by many, some are stated below.

Gorillas with silverbacks are the male species that lead the gorilla troop in the wild. This indicates that gorillas have reached sexual maturity. The silverbacks are a sign of dominance, which not only ends at visual appearance. Gorillas with silver hair are found to make decisions on behalf of the troop, mediate conflicts, and protect their young creatures from other predators.

Gorillas prefer a vegetarian diet as against chimpanzees. Gorillas do not eat meat; instead, they opt for leaves, fruits, bamboo shoots, vines, etc., majorly depending on their habitat. Some of them may occasionally indulge in insects like termites and ants but are not known to hunt other animals for meat. That is why one may find extensive greenery and vegetation in Uganda so that the gorillas do not fall short of food.

Gorillas are enormous, and some are incredibly humongous. They spend most of their time on the ground but are found to build their individual nests on trees every night. These nests’ locations are different each night as these creatures are continually travelling around in the forest. The silverbacks generally sleep on the ground to safeguard the troop, while baby gorillas are always spotted with their mothers. In Bushman Safari, we provide you with a live experience of witnessing gorillas’ nests in Uganda. We customize our tour packages based on what you wish to experience.

The majority of the characteristics of these primates relate to us humans. They feel almost every emotion that a human experiences. Gorillas are considered to be highly compassionate about their relationships around the habitat they live in. These creatures have projected empathy and felt grief and happiness. Watching these empathetic and fun gorillas is something you must have on your bucket list; it is definitely worth the while and money spent. If you wish to experience gorillas in Uganda, you should consider getting in touch with Bushman Safari. We have a range of packages in Gorilla Tours, ensuring we give our visitors a lifetime experience.