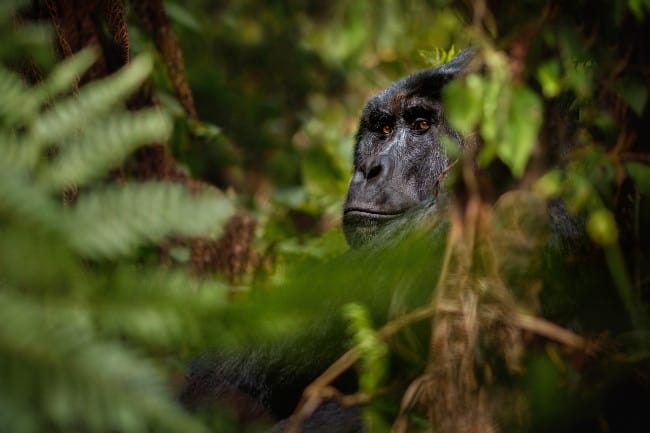 Home to 54 different countries, the African continent has a lot to offer to the rest of the world. Aside from the rich culture and vibrant cities, Africa also has many natural and geological wonders.

With its beautiful landscapes and flora, the continent is the perfect home for many exotic creatures. One such beauty is the endangered mountain gorillas of Uganda.

It is an extraordinary privilege to quietly observe and even interact with the mountain gorillas of the Ugandan forests. African mountain gorillas are unfortunately endangered, with only around 1,000 in existence. However, there is some good news.

Previously, African mountain gorillas were classified as critically endangered. But with the steady increase in their population in recent years, they were able to move to the endangered category. And if this rate continues, their numbers are sure to increase over time.

If you wish to meet the endangered species in person in a safe and protected environment, mountain gorilla trekking in Uganda is an excellent way to do so. In fact, half of the world’s mountain gorilla population can be found in the Bwindi Impenetrable Forest National Park in Uganda.

You can also support the local community by hiring a porter to help guide you through your gorilla trekking. As you trek, you’ll be faced with challenging terrain, which can be right up your alley if you’re down for an adventure. Plus, the difficult terrain is definitely worth it once you get to see the mountain gorillas in their natural habitat.

The Relationship Between Mountain Gorillas and Humans

Before you go mountain gorilla trekking in Uganda, it can be helpful to learn more about the species and their history with humans. The world first became aware of the existence of mountain gorillas in 1902 when a German explorer came across two of them. Unfortunately, the explorer killed the gorillas, setting in motion the violent relationship humans had with mountain gorillas.

With continued poaching and deforestation, the mountain gorilla population declined to around just 300. At this point, there was a great risk of extinction. However, thanks to the efforts of zoologist Dian Fossey to advocate for the protection of mountain gorillas in 1985, the critically endangered species were saved from extinction.

The combined conservation efforts of world wildlife conservation agencies and the governments of Uganda, Rwanda, and the Democratic Republic of the Congo led to the increase of the mountain gorilla population. These efforts included protecting their natural habitat and involving the local communities in the conservation process. The mountain gorillas weren’t the only ones who benefited from this, as the local residents were given better employment opportunities, education, healthcare, and sanitation due to the growing tourism from gorilla trekking.

Mountain gorillas are the largest living primates on earth and are one of the closest relatives to humans as they share 95 to 99 percent human DNA. Similar to humans, mountain gorillas are social beings. They live in stable and organized communities or families of up to 40.

The group leader is the silverback gorilla, which is the alpha male. He protects the entire gorilla family with the support of the other black back gorillas. The group also includes female gorillas and young ones.

These groups often live in the mountain rainforests, where they rest, groom themselves, make new nests, and occasionally climb trees. As long as they remain undisturbed, mountain gorillas are quite peaceful and calm animals. They can even live in harmony with other animals if unprovoked.

Go on the adventure of a lifetime while doing your part to protect the mountain gorillas with the help of Bushman Safaris. We offer tour packages for gorilla trekking in Uganda as well as other safari tours. Book a tour now!