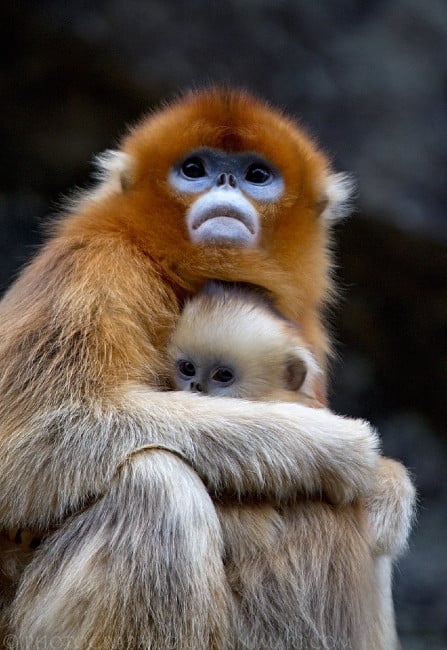 Golden monkeys have evolved over time, from the old world to the new world. Their unique physical features make them look stunning. Only recently, golden monkeys are recognized as a genetically distinct species. It is fascinating to know about their lifestyle and traits. If monkeys and their species fascinate you and you are curious to know all about them, then you will definitely scroll till the end of the page. Today, this article will acquaint you with the things you didn’t know about the golden monkey.

Golden Monkeys are highly social creatures; you would often find them in the group of 30 to 80. Although, the group size will differ based on elevation. The lower elevation has the highest groups and vice-versa.

Jumping from Bamboo to Fruits

As Golden monkeys are herbivorous primates, their primary nutritions are bamboo trees, and branches, and sometimes they even feed on flowers. Although they are herbivorous, they also eat invertebrates like insects, worms and others. The highlight of their diet is that it changes with the season. When they have fruits to eat, they won’t feed or bamboo. They always prefer fruits over bamboo, so much that when they have fruits, they discard bamboo.

The Dominant Male and Protector Female

Golden monkeys are usually divided into smaller groups and distributed around the areas where bamboo trees are found the most. Although there are more females in the group compared to males, it is often dominated and directed by the male. The dominant males mainly keep a check over the group and conduct their primary role of mating. Usually, the males after mating leave the group, and females generally protect their territory. There is at least one male in the group of females.

Bamboo provides them food and shelter as Golden monkeys build their homes from bamboo trees. Additionally, they carefully weave multiple bamboos together and craft a bed for themselves. After travelling for food during the day, they come to rest here at night.

Golden monkeys’ communication is judged by their calls, so female calls display a more social function, males’ calls are aggressive and defensive, and younger one’s calls show their submissiveness. The highlighting fact is, Golden monkeys primarily communicate with facial expressions.

If primates’ human-like behaviour intrigues you, their antiques make you laugh, then you will be curious to know how animals and humans are quite similar. The best place for a monkey lover is Uganda, and the best company to take you there is Bushman Safari. Bushman Safari has exciting treks and trips you don’t want to miss, plus they have a customized tour option that allows you to go for a tour as per your plan.