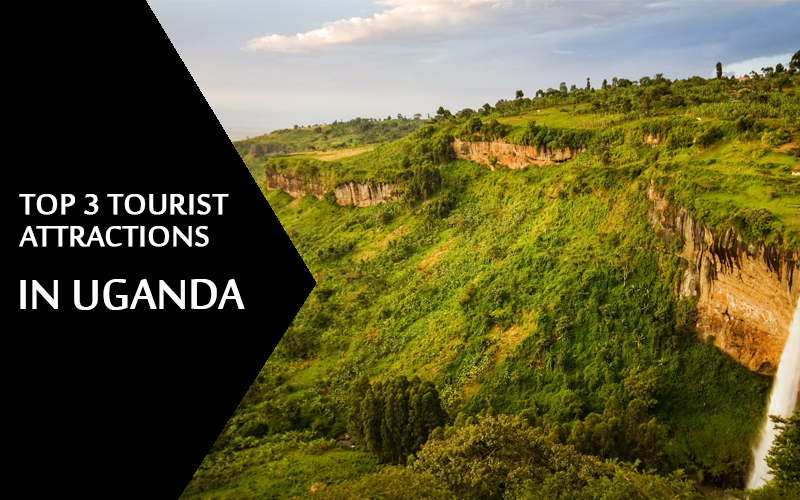 If there’s one place in the world where you can find a collage of views, that’s Uganda. People who have already visited this place appreciate its biodiversity, profusion, greenery, calm atmosphere, and picturesque views. That’s one reason the famous explorer, Winston Churchill, repeatedly labeled this spot as ‘The Pearl of Africa.’ The way he has described this beautiful piece of earth leaves everyone in awe, and that’s why some famous Hollywood celebrities headed to Uganda for tourism and humanitarian purposes.

Modern Uganda has a lot more to offer than it did in 1908 to Winston Churchill. While there are tons of things you can do there, we’ll only touch the top 3 tourist attractions without which anyone’s visit to Uganda won’t be successful.

This ancient rainforest is situated in Southwester Uganda, probably painted with over 1000 shades of green colour. You’ll see most hillsides coated with cool mist, but because the driest seasons are the best to visit Uganda, you may find variable weather conditions. However dry or chilly the weather is, you’ll always find the surroundings pleasant and cool enough because of the green vibes that float in the air. This national park is home to numerous natural yet unique species of local flora and fauna. People who book their Gorillas trekking sessions in Uganda can meet mountain gorillas that aren’t found elsewhere in the world, not in zoos, not in artificial safaris because they can’t survive in captivity and love settling in troops.

From Celebrity Diaries: During the pandemic, nature had gotten more time to nourish this part of the world, which is otherwise crowded with tourists from all over the globe, including celebrities. The most celebrated American Star, Koshie Mills, made an eight-day visit to Uganda, where she dedicated most of her time to Bwindi Impenetrable National Park and Murchison Falls National Park, appreciating the beauty of the places. Soon, she was hired to promote the conservation campaign named ‘Back to the Source.’ According to her, your time will quickly slip, just like hers, when you are feeling so serene and peaceful.

According to some reliable sources, this national park covers more than 3893 square kilometres of forest land. If you plan to visit it during moderate temperatures or daylight, you may find the rarest species of birds, including The Great Blue Turaco and Shoe-billed Stork. Unlike Bwindi Impenetrable National Park, the area doesn’t only have shades of green, but you’ll find a mixture of blue, brown, green, and orange because of the various species of mammals, birds, and wildflowers.

From Celebrity Diaries: Famous American star and model, Sophia Bush went to Uganda for a charity fashion campaign. During her expedition, she marvelled with the women who created hand-made jewelry. She visited The Murchison Falls National Park and The source of the River Nile.

One of the most-viewed national parks of Uganda, this boating hub, is located in the Western wing. If you’re planning a tour to Uganda, visit this spot too since it offers epic game drives. Especially if you are an early riser, you can expect to see the rarest species of chimpanzees, Nile crocodiles, and mammals like African leopards and lions, bush elephants, and Ugandan kob.

From Celebrity Diaries: Simon Curtis and Corey Gibson visited Uganda for promotional purposes. According to them, they fell in love with the immensely beautiful plains and game drives of the Queen Elizabeth Park of Uganda. During their visit, they actively participated in the ‘Friend-a-Gorilla’ campaign aimed towards conserving their natural habitat and to discourage hunting of these endangered species who have their homes in the heart of this beautiful continent. Even after going back, they kept directing their efforts to this divine cause.

More and more people have started realizing the importance of quiet moments close to nature. Most minimalists even prefer these African Safaris over contemporary wonders of the world, Middle eastern skyscrapers, and snowfalls only because of the solitude and rich peace they get to experience at these national parks. A tour to Murchison Falls National park, Bwindi Impenetrable, and Queen Elizabeth Parks have proven to be personal development breakthroughs for millions of people around the world.

PrevPreviousRead This Before Opting for an African Safari!
NextWhy It’s The Best Time To Opt For Uganda SafarisNext